The Most Solar-Saturated Zip Codes in California

There is no question that solar power is rapidly growing in many different counties across the United States. People are starting to become educated about the many benefits to going solar as they notice their neighbors save on their electricity bills and become independent from ever-increasing rates of utility companies. Although the trend is growing more every day as more and more people benefit, California has grown the most. In fact, two out of five of the customer-owned solar systems in the United States are owned by California residents.

There are several reasons why California has soared to the top of the charts for solar saturation, some more obvious than others. California is an ideal place geographically and weather-wise for solar, with its vast supply of sunshine and generally low amount of shade. The low humidity and low chance of precipitation make solar panels even more attractive because buyers do not have to worry about any weather damage or maintenance with their system.

Another of the reasons the Golden State is leading the country with solar is because of the blazing hot summer months where air conditioning and pool pumps are running most of the time. Cooling systems are driving electricity bills sky-high. Turning on the A/C has peace of mind if it will not come with a nasty bill in the mail from the utility company. 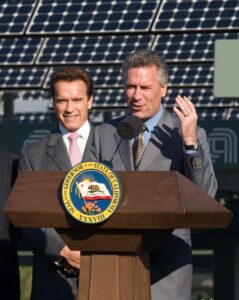 Another incentive that has encouraged the growth of solar is the push of former Governer Arnold Schwarzeneggar, who in 2004 set a goal of one million solar roofs by 2018. This lead to the $3.3 billion Go Solar California! Campaign, which has spurred purchases of solar systems on over 537,000 buildings including: homes, businesses, schools and farms. Solar is becoming more common than not in many neighborhoods.

To be more specific, there are several zip codes that have the highest percentage of solar homes compared to the total number of single family homes, according to the Center for Sustainable Energy. For instance, San Diego has one of the most solar areas in the state. 21 of the top 50 solar zip codes in California belong to San Diego county, with 76,239 solar homes as of April 2016 (one in eight). The best example of solar saturation is in Scripps Ranch in San Diego, which is a record high 26%.

Sitting at number 4 is a county that we at Energy Saving Pros serve quite often, El Dorado Hills, with 25%. As you can see, the total number of solar homes is the highest of any zip code in the top 10 with 2,992 solar homes. Another great example of how many people in our area have gone solar is Rocklin, which is a close number 5. Clearly, Placer County is starting to believe in the great investment of switching to green and renewable energy. With that being said, this table does not completely display the solar impact in all of Placer county, because smaller communities like our hometown Loomis are not taken into account. This is because the research is limited to zip codes with more than 5,000 single-family homes. Also, only counties that use PG&E are included, so cities like Roseville are excluded as well. If these cities and towns were included in the sample, the picture would show even more so that Placer County is saving BIG on their utility bills.

The trend of switching to solar power is still ever growing. As the word spreads about the benefits and people see their neighbors, families and loved ones save money and help the environment, more and more people are considering whether solar makes sense for them. Take the guess work out of the research and give us a call or fill out the Contact Us page for a free quote. We will let you know how we can help you improve your energy-efficiency and save BIG on your energy bills.

For every 11 solar panels get the 12th solar panel free and get up to 25 years financing with zero down payment.